Father of the Ukrainian hryvnia 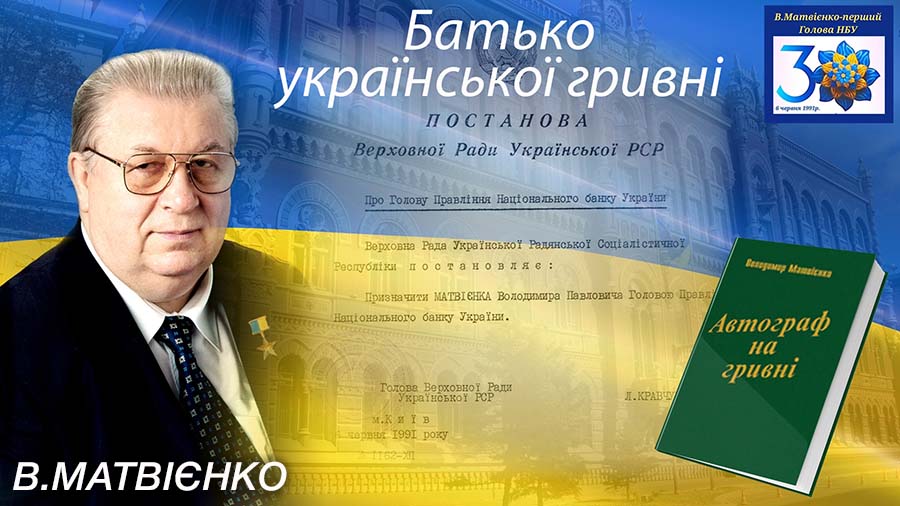 On June 6, 1991, the Verkhovna Rada of the Ukrainian Soviet Socialist Republic recognized Volodymyr Pavlovich Matvienko as the Head of the Board of the National Bank of Ukraine. The Soviet Union was still in existence when from the rostrum of the Supreme Soviet session Volodymyr Matvienko voted for establishment of the banking system of independent Ukraine, implementation of the national currency – hryvnia and international settlements through the National Bank of Ukraine. In the words of the then head of the State Bank of the USSR Viktor Gerashchenko, “Matvienko had ruined the Soviet Union”.

The central financial bodies of the USSR and later the Russian Federation interfered with Ukraine’s efforts to create an independent banking system. We had to act at our own risk. Given the importance of creating a national banking system, Volodymyr Pavlovich outlined the main strategic directions of the NBU’s work: terminally opening correspondent accounts in foreign banks to direct Ukraine’s foreign trade turnover to the NBU accounts and, this way, mobilize foreign currency funds to strengthen Ukraine’s independence. This was possible. In a short period of time, the transactions of Ukrainian companies were transferred from the funds of the Soviet “Vnesheconombank” to the NBU’s accounts in foreign banks.

Understanding that real sovereignty of the state is possible only with the presence of its own national currency, the NBU experts, together with Volodymyr Matvienko, developed the concept of the monetary reform. “Work on the creation of the hryvnia began long before Ukraine received its own currency, – Volodymyr Matvienko recalls. – In 1991 the National Bank, acting as the central credit and banking institution of the country, actively entered into negotiations with leading foreign companies on developing national currency and creating its own material and technical basis for its production in the future. At the same time the Ukrainian painters Vasil Lopata and Boris Maksimov worked on the design of hryvnia banknotes, the implementation of which was scheduled for January 1992 according to the parliament’s decree “On the National Currency in Ukraine”. So, the first hryvnia banknotes appeared on the world already in 1991, but were put into circulation only in 1996.

It is important to note that the introduction of coupons for multiple use into circulation at the beginning of 1992 was regarded only as a preparatory step before the real monetary reform. Also the first Ukrainian currency – koupon-carbovanets, put into circulation under the conditions of the ruble zone exit and deficit of means of payment, helped the Ukrainian economy to avoid the non-payment crisis and to form in short terms the own, independent from the Russian Federation, cash and non-cash monetary circulation. By the way, similar experience was used by other countries of the world before the introduction of own money, including the United States.

As the first Chairman of the NBU Board, V. P. Matvienko performed in 1991-1992 large-scale organizational work for the establishment of the central bank, establishment of the second-level banking system, registration of the first commercial banks. On Volodymyr Matvienko’s initiative and direct participation, the first designs of the national currency hryvnia were produced and the foundations for the issuance of Ukraine’s own banknotes were laid. Volodymyr Matvienko, Head of the NBU Board of Directors, signed the hryvnia banknotes into circulation in 1991, at the same time, their first edition appeared in London.

According to the words of the first head of the National Bank, at that time the situation in Ukraine was complicated by material and financial difficulties, lack of experience, influence of external factors and sometimes political pressure. Thanks to the personal team of bankers in the first years of the NBU’s work the main legal standards for the functioning of the banking system were established, economic standards for the activities of commercial banks were developed, recommendations on lending activities were created, etc.

A number of important subsidiary institutions, such as the Scientific and Research Institute of Banks and the Center for Technical Maintenance of Calculating Technology, started operating under the NBU. The State Treasury Service began its work, the main task of which was to form a stock of valuable metals and stones in Ukraine. The National Bank signed five contracts for the purchase of 10 tons of silver and several hundred kilograms of gold and platinum, acted as a contractor for the development of gold deposits acted as a customer in the development of gold deposits in the Zakarpatska region, and the enterprises producing diamonds, etc. were placed under the control of the NBU.

Creating a basis of monetary policy of the state, the development of the concept of implementation of the national currency – the hryvnia, the entry into the system of international payments were strategic objectives of the NBU in 1991-1992 years. A range of measures in the creation of the national payment system was implemented, and the correspondent relations with the leading banks of the world were established, the issue of joining the International specialized banking and clearing system SWIFT as a full member was resolved positively which meant the recognition of the young Ukrainian state by the world financial colleges.

In 2004 Volodymyr Pavlovich Matvienko was awarded the title of the Hero of Ukraine and received the Order of the State for his personal merits before the Ukrainian state in the development of the bank system, perennial selfless work and public activity.

As an outstanding financier and patriot of Ukraine Volodymyr Matvienko is awarded high state honors – the Order of Friendship of Peoples, Honorary Distinctions of the President of Ukraine – “the Order of Prince Yaroslav the Wise” of IV and V degrees, the II Degree Order “For Merits”, the Certificate of Honor of the Presidium of the Verkhovna Rada of the USSR, the Certificate of Honor of the Supreme Verkhovna Rada of Ukraine, the Certificate of Honor from the Cabinet of Ministers of Ukraine, and also many orders and medals for services in the field of economy and banking, for scientific, public and charitable activities. The Laureate of the international awards “Druzhba” and “Slov’yani”, the multiple winner of the International Open Rating of Popularity and Quality of Goods and Services “Golden Fortune”, the winner of the “Prometheus Prestige” Award of the IV National Program “The Man of the Year 99” in the nomination “The Financier of the Year”.

For his contribution to the development of the financial system, creation of an effective and efficient banking structure, and development of international cooperation in the banking sphere, he was awarded the awarded the Order of Honor of the International Personnel Academy. The International Biographical Centre (Great Britain) awarded him the honorary title of the Person of the Year 1998-1999, and he was also awarded a diploma and a silver medal for outstanding achievements in the field of economics and banking. Volodymyr Matvienko’s name is listed in the International Biographical Dossier, International Directory of Notable Intellectuals, “2000 Outstanding Intellectuals of the XXI Century”, “500 Leading Figures of the New Millennium”, and “Innovative Thinkers of the XXI Century”. V.P. Matvienko is a Honorary Member of the Board of Directors of the American Biographical Institute, the owner of the Laurel Wreath and recipient of title “Laureate of the International Award for Personal Achievement and Merit to Society”, Knight of the Diplomatic Order, awarded the Medal of Honor, which is a symbol of respect and esteem in the United States, as well as numerous other international awards.

According to the official certificate of the Crimean Astrophysical Observatory, the minor planet discovered on November 5, 1978 and listed in the international catalog under number 6622, was given the name MATVIENKO.

Author of monographs and books “State and Banks”, “Autograph into Hryvnia”, “Banker’s Considerations”, “Prominvestbank: Strategy of Implementation”, “Philosophical and Economical Views”, “Desired and Actual (Are the Classics Right?)”, “Planet of Life”, “On your own through life”, “Your Son, Ukraine!”, “The Teren of Life”, “Signs of the Era”, “From a Worldview”, “The Nuclear-Free Memorandum”.

Author of poetry and song books “Loving My Ukraine”, “On the Native Plains”, “To My Star Song”, “My Souls Worrying”, “The Guardian of Memory”, “I Have Ukraine In My Heart”, “To Ukraine – As to a Temple”, “Create the Ukraine” and a collection of aphorisms “Witty Words”.