Concerts "My dear Ukraine, take care of your sons" on the territory of Anti-Terrorist Operation

Concerts "My dear Ukraine, take care of your sons" on the territory of Anti-Terrorist Operation

On 15 October and 16, the patriotic concerts were organized in Bakhmut and Kramatorsk thanks to Volodymyr Matvienko, activists, and volunteers.

The lines from this work ring as true today:

protect all of us,

will fight for freedom

For all of us!

The host of the concerts was People’s Artist of Ukraine Volodymyr Oberenko, who recited poetry, talked to the audience, and closed the concert with the iconic songs “Sons of Ukraine” and “March of Patriots”.

The musical part of the evening began with Honoured Art Worker of Ukraine who performed the dramatic songs “Black Crow” and “Sybirskyi Waltz”, and then performed a composition “Swans” full of faith and hope.

People’s Artist of Ukraine Oleksandr Vasylenko continued the concert with patriotic songs “Glory to the Heroes!” and “Uprise Ukraine!” and the next “Come Back Alive from The War” is dedicated to all the military got a standing ovation. After all, the highest value is a man’s life, and a soldier is always ready to sacrifice it for the sake of the Motherland. It raises only admiration and respect.

Semen Torbenko Honored Art Worker of Ukraine, presented the composition “I Love My Ukraine”, and a song full of tragedy about the Second World War “Maky Chervoni”.

Then Vasyl Voloshchuk Honored Artist of Ukraine came on stage and performed the songs “Ukraine in My Heart” and “Polski Viazy”, and also played the instrumental composition on the violin.

As mentioned earlier, the concert was closed by its host Volodymyr Oberenko People’s Artist of Ukraine, with the songs “March of Patriots” and “Sons of Ukraine”.

Volodymyr Matvienko was the author of the compositions and also the ideological inspirer and organizer of the event. Volodymyr Pavlovych is very concerned about the events in the east of the country and tries to support the fighting spirit of the Ukrainian military by his works, as well as to involve the locals in the Ukrainian poetic world and music.

On 15 October, the concert took place in Bakhmut. This city was chosen not by chance because Volodymyr Matvienko is its honorary citizen. It was from this small town that his career as a financier began. Here he achieved his first success at 25 became the Head of Artemivsk Branch of Donetsk Regional Office of the USSR Budbank.

Bakhmut city gave a warm welcome to the concert, the hall was filled with spectators of all ages: children, soldiers, pensioners, young adults. Together with the artists they sang songs about Ukraine, thanked the soldiers, talked with them. The 50 most active viewers received an annual subscription to the newspaper Literary Ukraine. We gifted books and songs, we gave unforgettable impressions.

After the concert, the organizers went to the firing line of the 12th separate armored infantry battalion to deliver aid, as well as to remember their time in the service, because the organizers of the event know what means war.

On 16 October, they visited Kramatorsk, and gave a concert. The soldiers and locals enjoyed the concert program, and the best thanks were the invitation to hold as many similar events as possible.

The libraries of both cities were replenished with books by Volodymyr Pavlovych Matvienko, both specialized scientific literature and poetry collections. Books with poems could be obtained by anyone, and a special small collection of patriotic poems “My Dear Ukraine, Take Care of Your Sons” was gifted to the soldiers to support the fighting spirit.

It is worth noting that the visit also had a volunteer mission. After the concerts, all the organizers visited the headquarters of the 101st security team of the General Staff of the Armed Forces. Thanks to Yana Synhaevska, the defenders received military clothing and cars, and Natalia Stepanova handed over food and military supplies.

Also, during the visit, the soldiers were awarded by Civil Society Organization Defenders of Ukraine, were presented letters and drawings from children of Kyiv schools.

Special thanks to the soldiers of the 101st security team for a warm welcome, a delicious lunch, and interesting excursion.

Many thanks for the support and assistance of Kyiv City Union of ATO Veterans, Artemivsk Music School named after I. Karats, the Palace of Culture Budivelnyk, and the Bakhmut City Administration.

We encourage everyone to join our activities. Glory to Ukraine! 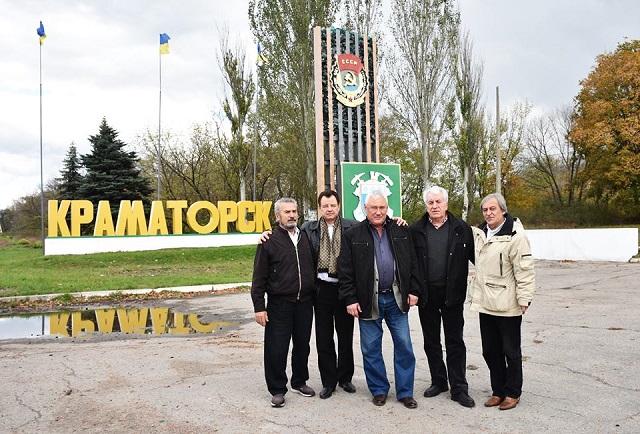